Exploring how designers reinvent and reshape the human body also thanks to new materials and techniques is one of the constant preoccupations of the fashion industry. Yet, at the same time, there are also some serious concerns about traditions getting lost in our digitally technological age. A recently-opened exhibition organised at the London-based Korean Cultural Centre UK (KCCUK) manages instead to combine these two aspects in a clever way. “A New Space Around the Body” celebrates eight innovative Korean designers – selected by curators Ji Hye Hong and Sofia Hedman – through installations inspired by the traditions of their home country.

Symbolic white cotton, Hanji paper and totem poles guide the visitors through the exhibition space featuring avant-garde and conceptual pieces: Minky Jaemin Ha explores the stages of a person”s life in capitalism through sculptural garments characterised by dramatic shapes; Juhee Han creates in her knits combinations and clashes of unexpected fabrics and textures, while Ara Jo – whose pieces also appeared in the “ARRRGH! Monsters in Fashion” exhibition – delves into a world inhabited by mysterious creatures.

ZOOT Magazine: Is this the first time Korean designers are celebrated during the International Fashion Showcase that also coincided with London Fashion Week?

Ji Hye Hong and Sofia Hedman: Yes, and it is also the first edition of the International Fashion Showcase, a collaboration between the British Fashion Council and the British Council, part of the Fashion 2012 Cultural Programme, developed to celebrate the year of the Olympics and Paralympics and honour their values of international respect, excellence, equality and friendship.

Z: Which themes are tackled through the designs showcased?

JHH & SH: This exhibition focuses on the aesthetic dimension of fashion and looks at the transformation of fashion objects into artefacts. Entering the exhibition, you are greeted by eight pine installations, one for each designer, as nature and natural landscapes are recurring themes within traditional Korean folk art. So, embracing the airiness, brightness and openness of Korean craft, the exhibition design invites the spectator to step into Korean surroundings. The installations are visually reminiscent of the aesthetics of traditional Korean doors, with their rectangles and geometric shapes. The walls in the installations are stretched with white cotton to call to mind the traditional Korean white paper called Hanji, made with the bark of the mulberry tree. This is also a reference to people”s attire: for centuries, ordinary people wore undied white clothes in their everyday life, it was only during special occasions that official and ceremonial clothes were worn.

The exhibition design and the catalogue also include a lot of traditional Korean good luck symbols: to protect our installation and bring good luck, Orlando Campbell and Julius Lightfoot carved for each designer a totem pole resembling Korean Jangseungs. Worshipped as the village protector gods and also known as ‘devil posts’, the totem poles were traditionally placed at the edges of Korean villages to mark the boundaries. Their fierce expression and goggle eyes were created to frighten away evil spirits. The designers” collections are also presented in the visual context of Minhwa, that is Korean folk art paintings, from the 17th century onwards. Minhwa also involved a magical dimension with its symbols and recurring motifs. Traditional art is part of a cultural heritage which contemporary designers either continue or react against. Besides, by studying the old paintings, one gets an insight of how clothes were used and worn. To evoke all these aspects, graphic designer Serge Martynov contextualised and juxtaposed in the exhibition catalogue allegory and experimental fashion.

Z: What was your selection process regarding the designers featured?

JHH & SH: “A New Space Around the Body” explores the more experimental and artistic dimension of the South Korean fashion system, so, rather than focusing on trends and functionality, we selected designers who bravely challenge conventions with integrity and humbleness. All the selected artists have a very trained eye and they were selected for their remarkable artistic and technical skills, their use of diverse materials, desire to explore the space around the body in an experimental way, extending the idea of what the body can be and disguising it at the same time.

Z: Can you introduce us the work of the designers featured?

JHH & SH: Kathleen Kye’s work is characterised by humour heroically used to challenge conventions; Ara Jo’s obsession with mysterious creatures inspires her sculptural and experimental cuts; Juhee Han uses crochet and macramé to translate interior design surfaces into unique textures for the space around the body; Yeashin Kim”s embroidered and appliqued techniques are asymmetrical explosions of different textured yarns, colours and decorative beaded details, mixtures of gloss and matt materials creating both harmony and proportion. In some cases, such as the facial masks by Minju Kim – a designer who conceives fashion a bit like a toy to play with – fashion becomes a substitute for the body, but also something that gives happiness and makes the wearer smile; in others, like in Minky Jaemin Ha’s collection, scuptural non-human forms are explored. Upon encountering the incredible looks by Unbounded AWE by Laykuni and Yoolhee Ko, the viewer enters instead a hypothetic world: both these designers create a parallel universe, a place in which you can escape to during uncertain times.

All selected designers work with very pure ideas that are then visually translated into their creations. If one tries to analyse fashion from an economic, sociological or psychological perspective, one will quickly realise that it is difficult to make generalisations from experimental designers like Minky Jaemin Ha and compare them with what houses such as Chanel or Dior stand for today. These designers are presented and consumed differently, they are created for different purposes, have different life cycles and carry different meanings that are interpreted differently by the audience.

Z: What fascinates you the most about these new designers?

JHH & SH: All the creations featured in this event have multiple layers and can be read from different angles. When looking closer at the fine details, one can discover surprising shapes, unexpected themes, astonishing textures, fantastic craftsmanship and beautiful explosions of colours. It is fantastic to see all these very eclectic, refreshing and fearless designers side by side with their work creating a vivacious mix, they truly are a feast for the eye and we hope visitors of this exhibition will bring back home their colourful humour and craftsmanship.

Z: Though each of these designers is pretty unique, they are all reunited by one thing: they all take their inspirations from very imaginative themes, pushing the creative boundaries almost to the limits of surrealism, do you feel this is a peculiarity of South Korean designers?

JHH & SH: Korean fashion is known for its menswear designers, meticulous tailored details and layered fabrics. It is characterised by a simple, neat and elegant design. Our designers” approach to fashion can also be seen in the light of traditional Korean costume, which also uses, captures and forms an extended space around the body, a space that has its own corporeality.

There is an older generation of Korean designers whose work is also defined by a very experimental and eccentric approach to fashion that has already managed to get acknowledged in the fashion industry. Finding his inspiration in Korean art, pottery, poetry and calligraphy, internationally known Lie Sang Bong has consistently surprised audiences for over twenty years with his voluminous, geometric shapes and architectural silhouettes.

Another designer, Juun J has been showing his futuristic, sharply tailored collections at Paris Menswear Fashion Week. Constantly re-inventing classic menswear, his work is defined by deconstructing and reconstructing existing shapes. Another impressively experimental Korean label is Steve J and Yoni P: the duo’s substitution of real bodies with abstract dolls in their Autumn/Winter 2010-11 collection is a fantastic example of blurring the line between fashion and sculpture.

Z: Is it difficult for a Korean designer to be acknowledged in the fashion industry?

JHH & SH: Korean fashion is currently forming a stronger identity. There has been a rising interest in South Korean fashion and this exhibition shows a very exciting new generation of designers all characterised by tremendously strong aesthetics.

Z: What did you learn about these designers while working on this event?

JHH & SH: In the interviews for the exhibition catalogue, the designers spoke of a very vibrant and rapidly developing fashion scene in South Korea. Seul Fashion Week and the fashion scene as a whole is evolving a lot over there and many see it gradually becoming the best in Asia.There are a lot of experimental Korean designers working both in and outside of Korea and all of them have definitely found their own way to express themselves. 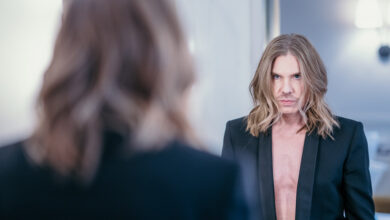 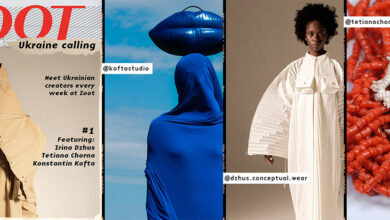 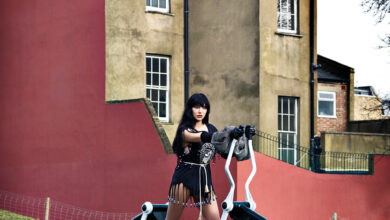