Sculptural metallic garments and headpieces took over the backstage as models began to get ready for Valentim Quaresma’s runway show on the final day of ModaLisboa. With a unified eyeliner makeup look done by Antónia Rosa’s team, models wore the designer’s futuristic looks marked by a blend of metal and fabric.

With a background in jewelry making, Valentim is known for working with metal and creating looks with incredible craftsmanship. For his Spring/Summer 2023 collection titled “Invisible maze”, the designer created looks where aluminum details beautifully integrated with leather, suede and twill garments. As ZOOT caught up with Valentim backstage, the designer shared that the inspiration for this collection was all about experimentation.

When I started making the collection, I tried to find a theme that would lead me in the right direction to my creative universe, which is a bit anachronistic. … It was a collection made in times of experimentation, trial and error — in terms of materials, fabrics and metals — in order to find the path I wanted. … This collection is trial and error but it’s also looking at mistakes in a positive way to shift and do something else.
– Valentim Quaresma Aluminum is a metal that I always like to work with and the color silver creates more in terms of expectation than gold. Gold is more connected to other things. I also wanted to give the collection a really anachronistic look and silver is more associated with the future than gold.
– Valentim Quaresma Aluminum accessories complemented the dark-toned looks, like a silver crown of thorns or neck and head pieces that resembled a futuristic version of an ancient Roman gladiator’s ensemble. A full top made with small metal rings and pared with 3-dimensional bracelets also added to this fantasy. As the show was coming to an end, violinist and singer IAN walked the runway, closing the show. As she played her violin with a silver-spiked glove, the musician wore a detailed metal-punctuated black look from the collection. With this crafted collection, Valentim Quaresma once again wowed the audience with his work and vision. Blending clothing design with jewelry-making techniques, the designer proves that garments can be made with almost any material – even metal. 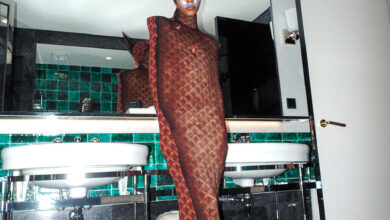 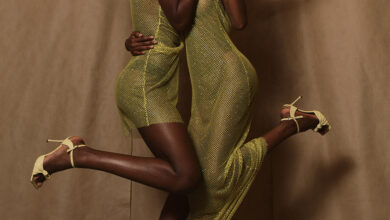 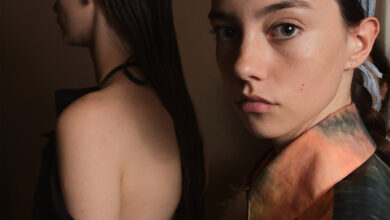