The day started early at ETIC. By the time my colleague Fernanda and I got there, you could almost grasp the tension in the air with your bare hands. A new atmosphere was starting to take shape at the school, and as we got inside an exhilarating energy filled the space. There were all of your backstage essentials: models running up and down, stylists going crazy over neon pink crocs, and production investigating why light #3 was not turning on.

So, let’s get into the backstage scene at the ETIC FASHION 2022—and dig a little further.

It was one of those “get out of the shower already sweating” kind of hot days in Lisbon. You can also add an extra layer of sweat if, on that same day, you are to present your graduation collection in front of peers, professionals and parents.

On the first floor, classrooms turned into fitting rooms, where all the real action took place. Here, we came across fashion design and styling students, as well as models, finessing details for both shows that were to take place at the school’s events lounge. The setting was arousingly upbeat, as everyone was swamped with shores, so we took the opportunity to scope the surroundings and adapt to the scenery accordingly—observing and interviewing as we got a tease of how the collections were coming along, with an overall feeling of wonder and excitement.

After some much-needed coffee breaks and DJ sound checks, we went upstairs and after a little digging, we stumbled into a whole new setting. The long corridors took us to a separate classroom-turned-fashion parlor, with another sea of models ready to be glammed.

In conversation with Antonia Rosa, Head of Makeup for the event—and Beauty Editor at ZOOT—we discussed having all students desires met whilst still sharing models in between shows. “It was about finding a common aesthetic, in general, that would be neutral to all students […] funnily most of their references were correlated, going from 90’s makeup looks to graphic liners. It was a no-brainer defining the end look for all the models, without making it dull.” And, indeed, it all came together seamlessly. Models had a soft beat: clear skin with little to no shine and sharp liners in neutral, earthy-toned colors.

Antonia’s team is a hand-selected group of talented artists, all of whom were former apprentices. “My students only come from word-of-mouth; it’s a specific selection process.” And you could tell how consent is a word in the vocabulary of her work ethic and how receptive these students are to her mentorship.

Now, for the first time, she’s partnering with Helena Vaz Pereira to teach a Makeup and Hairstyling course at ETIC, focusing once again on practicality and industry-based experiences. The course was born from the fantastic energy between the duo, who are also responsible for makeup and hair at Moda Lisboa (and many other remarkable moments in Portuguese fashion). Embracing the challenge of passing on their vision and expertise, Antónia and Helena prepared a hands-on experience in partnership with magazines, photographers and stylists, offering these professionals a real taste of the current reality of the fashion market.

After a good chat, we left Antonia and her team and headed downstairs once again, with about an hour left before the show. This time we went after the designers, who were all keenly open to letting us get a peek at the pieces before going down the runway.

At the atelier, we found a little piece of everyone from ETIC. From pictures on the wall of previous course projects to long rolls of fabric that were to be used for the collections. We were able to talk with some of the designers arranging last-minute details, and got to understand the psychology behind their motifs—which for each collection translated into renderings of their personal biases and post-pandemic life experiences. In case you missed it, Fernanda covered in full the ongoings of the fashion show and the designers’ backstories here.

At around 6:00 PM, guests were starting to arrive and a celebratory welcome soirée for the invitees kicked off outside. It was a nice gesture to include family and friends, as well as a great way to decompress with a glass (or two) of Prosecco. Meanwhile, a DJ played a groovy Chicago House set, which ended up being the perfect call to hype everyone up for what was to come.

Back on our beat behind the curtain, we befriended some of the folks from the fashion production team and accompanied them as the models started to line up in the hall. Final instructions were settled and everyone was getting ready for the spectacle.

As the first show was about to begin, Fernanda ran to the front row to catch the view from the perspective of the attendees, while I found a little corner right next to the runway entrance to capture everything from behind the scenes. At this point, what was done was done and everybody was starting to have a good time. It was noticeable how the air shifted as the night was really coming together, and the event they worked so hard for over the past year was becoming concrete.

For the second half of the event, however, things got real. As a journalist, watching everything was quite fun, I must admit. Being in their shoes: probably not so much. For their own collections, pressure took a toll, and nerves got on the edge. During this backstage no emotions were spared—including my own.

Models came and went in a surprisingly fast pace and the notion of time got twisted among all was happening. A girl you had just seen two minutes ago was already standing by your side Running Up That Runway. In between walks a whole sphere of things happened: earrings got lost, rubber gloves went missing and just as quick, though, all was being fixed in time for a smooth show.

The recipe goes as follows: spend 7 hours with complete strangers and observe how they transform a project into substance. Play as a fly on the wall, and you’ll start to comprehend how their workflow operates. Chances are you’ll get attached to it, too. At the end of the evening, I was cheering alongside these no-longer strangers as they celebrated the end of a journey. 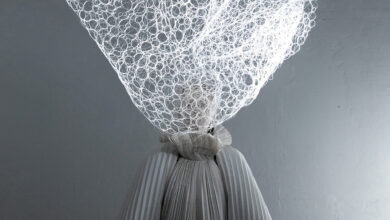